Grass Child: Music Is The "Marinade" Of Life


Music inspires us. It has the potential to speak louder than words and to convey feelings that help us get a better grasp of our own emotional truth. Sometimes music can be more authentic to us than the reality that surrounds us in our day-to-day existence. Music is feeling, it is poetry and it is the essence of life itself wrapped up in notes, chords and lyrics. It is a marinade that we soak our lives in, creating a tenderness within our souls in which we find solace and sanity.


Napa based groove-folk rockers Grass Child is such a band that use their music to create the sanity and solace many of us are looking for within life itself. Grass Child’s sound is a bit of rock and roll with taste of funky-folk and flavored with a sprinkle of reggae-fusion.

Each member in Grass Child is an accomplished and talented musician and performer. Sarah Madsen’s sweet, powerful and soulful voice lends harmony and breadth and she is a dynamic front woman; Brant Roscoe’s blazing yet gentle guitar adds depth and meaning to the music; then there is heartbeat that is the backbeat of Grass Child with Barry Forsythe keeping the pulse on drums along with the smooth and soothing bass lines that come from Jonathan Tindall.

Says vocalist Sarah Madsen of the band’s style, “None of us are nailed or pigeon holed into a specific style. We each write and create what makes us feel good. And yes, that’s “moody”. We’re all old enough to know and understand the different joys and facets of life. Luckily we have an outlet to express that.”

Grass Child has had many incarnations as a band, beginning in 1990 with guitarist Brant Roscoe and drummer Barry Forsythe putting together a band called Gypsy Grass Child with original vocalist Kurt Briggs Schindler. The band morphed again in 1995 with the addition of bassist Jonathan Tindall. The band at that time worked hard to make a place for themselves, gigging massively and cutting two full-length albums.

Various personal woes led the band to disband in 2005, each member going their own separate path, yet they kept in touch throughout the years following the breakup.

In 2009, Jonathan, Barry, Brant and pianist Charlie Thompson reconnected with new ideas and a desire to create their own music. They were without a vocalist this time, but luckily, through magic of a conversation with a stranger named Sarah Madsen, whom Brant met on a job site, the band found their “voice” fresh of her tour with Lynnard Skynnard tribute band “Skynnin’ Lynnard”.

“I went out to jam with them the first time with only tribute or top 40 bands and one original project in my arsenal. First thing they said to do was 'freestyle to what we play'. It was a bit nerve racking but nevertheless, magical,” remembers Sarah. “It was from then on that I began developing MY vocal style and intonation, my groove. Prior to that it had been all someone else's shit (copy bands). And once I jammed with these boys, I knew I didn't ever want to sing anyone else's song again, unless for it was for me and my jollies. So Grass Child was born.”

The group decided to let go of the “Gypsy” within the original band name and establish the new version of the band as “Grass Child”.

Within the first year together, Grass Child had renewed personal problems and disbanded again, only to re-group in 2011 with a pile of songs that were loosely recorded by Brant, Barry and Sarah. “Brant and I committed to each other and to our music. We decided not to lose any of it and to record the tracks we had written and we continued to write and arrange together at Brant’s house,” says Sarah.  “We went in the studio as much as possible (paying out of pocket) and we truly enjoyed that process. We spent the better part of a year recording together. Once Barry and Jon made contact again, we shared with him what we had been working on. Jon ingested what was there and wrote his bass parts for the new tracks.”

With the renewed desire to play music together again, the seeds of Grass Child’s full-length album, Marinade, were planted.  Says Jonathan, “The title Marinade actually came from a quote that Brant spat out during a rehearsal one night where we were being unusually creative.  He related that ‘we didn’t break up for a year, we were just Marinating.’  That and the disjointed recording process lending a bunch of individual ingredients to the overall recipe led us to the title.”

Marinade is definitely a hodge-podge of sounds and moods. “We started out as a mostly acoustic hippie-jam band that dabbled in reggae.  Many of those influences are still present, however we tend to pull more from Barry’s and my classical and jazz training, Brant’s heavy metal and Sarah’s classic rock styles,” says Jonathan.

The recording process is always an interesting journey for a band. Grass Child’s recording of Marinade was that and more. With busy schedules, families and the usual obstacles of life, the band needed to be creative within their creativity to record. “What was unique about the project overall was that it was a rare occasion that more than one or two of us were in the studio at the same time.  In the past, we’ve always recorded with the whole band present.” Says Jonathan Tindall.  “This project allowed a little more individual freedom in performance, with feedback often only coming from the engineer or perhaps one other member of the group.   After all of the tracks were recorded, we returned to the studio over several sessions to create final mixes and masters of the tracks, and completed the project in March 2012.”

Adds Sarah Madsen, “During some of the writing of Marinade, Brant and I used a handheld BOSS 4 track recorder. He'd stick some riffs or ideas on it and give it to me. I could then record vocals (with effects!) and get it back to him.”

Marinade opens with “1760” with it’s minor keys and marching, dirge-like beat with lyrics that tell, fittingly, of their rehearsal space where all the magic is created. “Fryin” in a fun, kinetic romp of acoustic guitar beginnings and acid-jazz rhythms that feels like a 1968 rock and roll acid-trip in itself. “Driftin’ Away” takes us on reggae-infused booty-bump and the song is probably the star of the album. “No one knows where the wind blow, all they know is their way….”

The feeling of longing is ever present on Marinade.  Three songs in particular point out ideas of wanting to create personal change. “Chasing Time” has some beautiful guitar work by Brant; both electric and acoustic, while the bass and drums of Jonathan and Barry roll like gentle waves and Sarah’s vocals hush and soar.  “Down Here” asks one to let go of ego, imploring those who only see the heights of selfishness to “come on, get down from yourself. ‘Cause I think you’ll like the feel down here”.  “Let Yourself Go” is a heartfelt call to using the power of love in order to see what is in front of you. “Look in my eyes and see my love, feel my love. Take a chance and come with me, be with me. Let yourself go, before I am gone”. The melodies and harmonies of all 3 songs melt one’s heart while soaring with the feelings of hope. 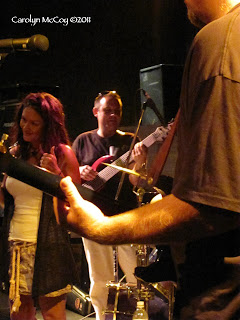 Marinade is a mostly acoustic disk, with itchings of both acoustic and electric guitar and bass strewn throughout. All members of the band contribute efforts to creating the songs. “We all write and create individually and together. There really isn’t one way that we come up with our songs.” Says guitarist Brant Roscoe. “Sometimes one of us will have the complete song arranged and ready to go, other times it’s just an idea or a guitar riff or drum beat that we build off of.”

The idea of songwriting and creating as a band is about “finding an interesting musical vehicle to tell a story with lyrics, or crafting lyrics to a mood or progression of a jam while trying to be original and relevant,” says drummer Barry Forsythe. “When the groove is right and we are killing it, all trials and troubles cannot find their way into that space.”

“The boys write all their parts. And occasionally lend to each other when they have a specific thing in mind,” says Sarah. “Either Brant or Jon will bring a message or a new riff to build off of and they make magic in the lab. Then it comes my way to see what melody and harmony I pick out, what arrangement in the time signature, meaningful lyrics and how I want to arrange them.” 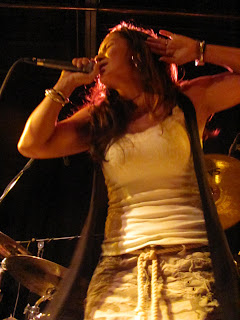 Sarah loves her band even amid the trials and tribulations they have endured over the years. “These boys are more than family, more than friends, more than brothers to me. It’s a rough fucking go, this making music shit. Those factors alone bestow a tremendous appreciation for just showing up, let alone creating together with these people.”

Most bands go through a lot in order to succeed and make the magic that is music. In some ways, being in a band is more like a “relationship” that must endure anger and fear, fights and making-ups, joys and achievements. But over all it’s all about the music and the desire for a musician to create with others.

“We’re family first and foremost; and as a family we definitely have our clashes and strife,” says Jonathan. “But most of all, we respect each other and truly appreciate each individual’s talents, quirks and contributions.  We get along really well these days and have grown closer in the last year.” 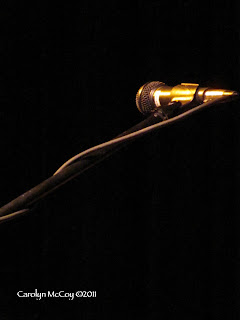 Grass Child is ready for another level of being in the music industry; they are solid in their lineup and they want to bring their music to more and more fans. But more than anything, they want to create music for the love of creating.

Says Sarah, “In this bullshit world of pop lyrics jammed into the boom-tiss techno crap with theatrics, costumes, make up and dancers, all I want to do is sing to you barefoot. No fucking effects. I want to make you feel the pain of my song not from what I recorded or from what I felt when I recorded it, but what I am feeling, right now.”

Brant Roscoe voices it best, “I believe there is no limit to what Grass Child can do or go in the music world. As long as were making music and playing for people, I am happy.” 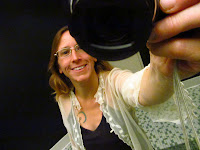