Out In The Back Of Some Cafe: Jeff Pehrson & The Fall Risk 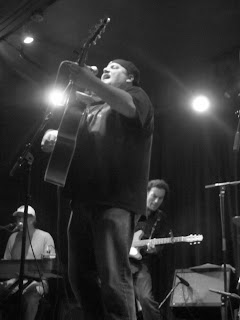 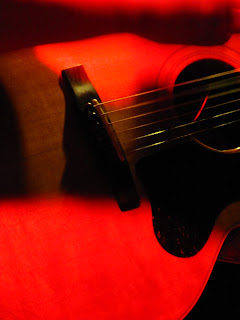 “Out In The Back Of Some Cafe, we'll hold the night a million miles away and wrap our hearts around one point of view. I might not be an author, but I'll write the book of you.”
Jeff Pehrson

Almost 20 years ago I was a struggling groupie in the San Francisco music scene, trying to find my way into the forbidden folds of rock and roll.  In the early 90's, I was trying to find a reason to be an internal part of the music scene that was a bit more satisfying than being arm candy for the musicians I dated.  I started to hang out within the mildly-popular San Francisco folk scene, hitting weekly open mics, house concerts and acoustic jam sessions at the local cafes and bars around my neighborhood, the Inner Sunset near Golden Gate Park. The famed Owl and Monkey Café churned out folkies like it did lattes and bagels.  Within that small, steamy venue I met many an aspiring folk singer/songwriter as I made headway into my now chosen path of music junkie.

Of all the lovely and talented people I met during that time I befriended one Jeff Pehrson, a golden throated songwriter.  Jeff, who sang solo as well as with others, kicked my ears into gear with his amazing tunes.   Jeff and keyboardist Matt Twain together formed Twain & Pehrson and he also achieved low altitude stardom with the band Box Set, which he formed with his long term “musical wife” Jim Brunberg.

Nowadays, Jeff is above and beyond old school folkie as his life travels have allowed him to lend his golden throated voice to this band called Furthur.  Furthur is made up of bunch of old rocker dudes from some little band called The Grateful Dead, namely Phil Lesh and Bob Weir, maybe you have heard of them.  In any case, Jeff has been keeping busy in many ways, all musical, since I met him.  I am here to tell you his story.

I, Carolyn McCoy, am now an aspiring rock n’ roll writer, having given up Groupie-dom some time ago when I realized I wanted to get into the flowing vibes of the music and not necessarily the tight pants of musicians.  Following one’s dreams with integrity and manifesting those dreams is really what this story is all about.  I sit in the beautiful garden of The Bazaar Café in San Francisco’s foggy Outer Richmond District, reminiscing about the past, present and future with an old friend, Jeff Pehrson, still very much the same golden-throated singer/songwriter he has always been, just a bit more famous.

Despite the notoriety that Jeff has found from his gig with Furthur, his main focus and inspiration is his new band The Fall Risk which he started in 2009 by gathering his musical friends of bands past. With Twain & Pehrson duo partner Matt Twain on keyboards and vocals, Mark Abbot (of Box Set fame) on Drums, monster bassist Dave Moffat (of the Megan Slenkard Band) and with Jeff Ballard on harmonica & percussion The Fall Risk is an almost finished product. The recent additions of Rich Goldstein on lead & slide guitar and multi-instrumentalist Sammy Johnston (also of Box Set), lending his golden touch on accordion, pedal steel and organ makes The Fall Risk a band with one hell of a HUGE sound.  Jeff agrees, “If I could not play with such a great group of musicians, I wouldn't have my own band. The reason I enjoy The Fall Risk so much is because playing with this particular group of guys is incredibly fun. As a songwriter, when you find a group of players whose main interest is simply serving the song as opposed to any individual heroics, you're golden. Mark, Matt, Dave, Jeff, Sammy and Rich have done that for me.”

As for the name of the band, Jeff’s story is priceless, “Mark Abbott's (our drummer) mom had been in the hospital, and thankfully she is fine. Upon her release, she was tagged with a "Fall Risk" bracelet as she had been medicated and was at risk for a fall if she walked. Mark thought it a totally appropriate name for a bunch of 40-somethings trying to play rock-n-roll. I mean, no doubt one of us will eventually fall down due to a bad hamstring!”

The Fall Risk wraps its acoustic-jam-rock sound around Perhson’s fine song crafting. When he was with Box Set, he shared songwriting credit with then musical partner Jim Brunberg.  Both men shared a bond of creating a narrative within their songs and using strong melodies coupled with soaring harmonies to match the words that were the heart of some great stories.  Pehrson, of his long, musical relationship with Brunberg and Box Set says, “Jim and I were huge folk music fans and part of the SF folk scene that re-emerged in the late 80's early 90's. Therefore, lyrics and storytelling were always in the forefront of our minds when writing songs. This has never left me, even as electric music became more of a calling. At the core, my songs are still folk songs with a backbeat. The lyrics carry more weight than the music...the story is the thing.”

In 1997, Capricorn Records signed Box Set to a sweet deal, allowing them much creative control over their music. Sadly, Capricorn went under after a massive buy-out, leaving Box Set other opportunities to go for bigger stakes. Sony Music tried to snatch the band, but loss of creative control over what Jeff wanted for his music made Box Set turn down the possibility of making that big hit.

“Box Set held off signing other record deals so we could keep complete ownership of our songs, that was the only move for us. Again, we came from the folk music world where the thought of relinquishing control over our songs was blasphemous. There was no other way to approach it as far as we were concerned. It's a rare thing to have a number 1 hit and not have to compromise many things, so I have no regrets. Obviously, the record industry is reaping the karma they have sewn as the Internet slowly pushes them closer to irrelevancy,” says Jeff.

Box Set ended up creating their own record label, titled “TherOwn Records”, setting them up for full creative control of the band and selling a lot of their music via the Internet. It worked well in their favor and to this day they still make a good profit off of their music, and it gave them touring opportunities to open for big name acts such as Willie Nelson, Lenny Kravitz and Ratdog and creating connections with these big named bands that will later produce more amazing opportunities for Jeff Perhson to make a name for himself.

Just recently, after Jeff’s stint with a 3-night run of The Furthur Festival at Angel’s Camp, California, his voice and knowledge of how things can flow within the endless improvisational nature of Grateful Dead Songs Jeff had secured the job.  By learning all the parts of 85 songs in about a 3-week period, Jeff proved he was ready for something really big.

“More than anything else, touring with Furthur has changed the way I look at live performance,” states Jeff on how the Further Festival has altered his ideas of his own music.  He adds, “I'm a lot more interested in giving the guys (in The Fall Risk) a great deal of space to solo. Giving them enough room to build a solo as opposed to having a set space that in many ways dictates what has to happen thematically. Being able to share in The Grateful Dead's philosophy on jamming has really opened my eyes to those possibilities. As Bob might say ‘you have to leave some sport in it’."

However, the fame has not gone to his head.  Jeff still has the same old heart of gold. His amiable personality comes out in all his performances, playing off the audience and bringing them all deeper into the embrace of his music. He has not forgotten how it was to be a struggling musician and keeps the music at the forefront of his mission on the planet.  “The music community is literally my family. Many of my oldest friends are folk musicians I met at the old Owl & Monkey Cafe in San Francisco in the mid 80's.  Those guys are my peers and the guys I still look to impress when I write a new song. Musicians group together for the same reasons as plumbers do, shared experience. It's easier to talk to another musician about having writers block, or how lonely it gets being away from friends and family for months at a time...they know what you go through because they've been there. It's a lifetime bond.”

Big thanks to my beloved editor Daniel Rauck, with whom I worship for the fine tuning of my words and streamlining of my ideas. OXOXO
Posted by Moonmama at 4:08 PM