A Fire in Their Veins: Spark & Whisper Out of any spark comes fire, followed by ashes and inevitably, re-growth. You can’t stop progress and you can’t stop things changing or morphing into something else.
Enter Spark and Whisper, a band that has risen out of the ashes of the Marin/Sonoma based folk trio Three At Last. Three At Last veterans Velvy Appleton, reprising his role on vocals and guitar and Anita Sandwina, sharing vocals in soaring harmony while playing a gentle guitar and mandolin, head the new lineup for Spark and Whisper. With new ideas and new members, Spark and Whisper takes a new direction, adding a rock-tinged edge to their previous folk sound.


Though keeping with their folk origins, Spark & Whisper takes the band up a notch with a sophistication and depth of a full band, giving groove and a bit of electric-sass to the music that was once pure acoustic simplicity. Says Velvy of the disbanding of Three At Last, “It was about creative and style differences. I think Anita and I were feeling the pull to move away from traditional folk. We wanted to drive a little harder, groove a little deeper, and explore a wider range of music and experience.  We wanted to be more modern and timely, and felt we could do this best in a different configuration.”
Burning brightly with their debut self-titled CD, Spark & Whisper take many songs from the time of Three At Last and in a sense, create new songs morphed from the old. Spark & Whisper is revamped, ripened and bulked-up with added bassist Paul Eastburn and drummer/percussionist/vocalist Scott Johnson, both  have been on a musical journey with Velvy with the Samba/Latin band Nobody From Ipamema. “There's so much trust and love in this band. I've played with these guys for 12 years and hundreds of shows.” Velvy states.
“When Anita and I decided we wanted to add drums and bass and GROOVE, I called Paul and Scott and they were very exited to join up and do this music with us. I was worried that they would think we weren't cool enough for them, but they have really embraced our songs and our sound and they have propelled us into new and unexpected places. They have made a tremendous impact on our feel. They are both virtuosic players who bring dance, jazz and swing to our songs…its so great to play with people who love/trust each other. Really a dream come true.”
Anita Sandwina and Velvy write their songs separately but there is much collaboration in making the songs come to life within the band. “We take great joy in interpreting and arranging each other's songs. We write from very different points of view, and I think that gives our material a great breadth and scope.”
With 6 previously unrecorded songs on the new disk plus 2 revamped songs that were recorded on albums of Three At Last, one would think there might be the tendency of making the arrangement of the songs similar to Three At Last, but Spark & Whisper has a different group dynamic musically. The individual musicians and the chemistry of each of the members interacting together lends a different flavor than what was created with Three At Last. “Spark & Whisper goes so many new places; the Arabic jam in "Once", the Samba feel of "Carries Me Away", the country waltz of "Had What We Had", the wah-wah solo in "Yesterday & Tomorrow", the dobro & bottleneck slide of “Grandma's Song”. It feels more real, more creative and more confident. I feel the material is more mature and far less "corny" than the Three At Last songs.”
Most of the tracks were recorded and mixed by Matt Wright at Prairie Sun Recording in Cotati, Ca. with additional mixing and recording at 7 Generations Recording in Forrest Knolls, Ca. “Spark & Whisper” is an amazingly gentle album with hints of the band’s newly formed “rock band bent”. With basic tracks for the album recorded in two vary long days, Velvy feels the recording process is just getting easier each time around. “This album was made with no conflict or turmoil. Three At Last split up in December. By January we had the new band in place. We rehearsed, recorded, mixed, mastered, did photography, graphic design, production and we had our finished CD by April, all without a single fight, disagreement, or moment of tension. A great example of “flow”. We take it as a sign that we're on the right track.”
Velvy explains that he and Anita chose the name Spark & Whisper because they felt that the name of the band and music itself should “hint at excitement and creation and intimacy and connection; the things we love most in this life, and the moments of transcendence we try to achieve in our recorded music and at our shows.”
Spark and Whisper’s new CD as well as tour and gig information can be found at http://www.sparkandwhisper.com
Album Art by Michael Garlington
All bands photos copyright Carolyn McCoy.
Moonmama says, "Me press, me write pretty words. Me good" 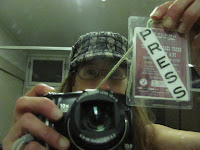