Points North Thumbs A Ride on a “Road Less Traveled” 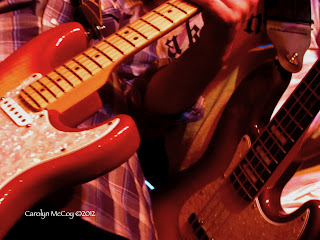 The Beginning of the Journey:

On a Sunday morning in mid-December many years ago, in a rehearsal space in Rohnert Park, California, 3 men met for the first time to jam and explore if any sort of musical magic could be made. A Craiglists ad posted by Bay Area drummer Kevin Aiello brought guitarist Eric Barnnett and bassist Damian Sisson together, and in a matter of time the band Points North, an all-instrumental, yet super hard-rocking Northern California band was born.

“We got together on a Sunday morning and started playing to a basic song idea that Eric had brought in (rather than playing an endless jam in ‘E’). It all felt good and our main intention was just to get together every couple of weeks and have some fun. Before you knew it we had about 45 minutes worth of working material,” recounted Kevin Aiello.

Guitarist Eric Barnett remembers the beginnings of what would turn out to be a solid musical relationship. “We basically met each week, just writing and jamming and then eventually doing a little home recording that became our first demo.  From there, we decided to book our first gig which turned out to be at Time Out in Concord, Ca. It wasn’t easy, getting a show as an unknown instrumental three piece and if it wasn’t for Damien, who was in about a thousand bands at the time, we probably wouldn’t have gotten one.” 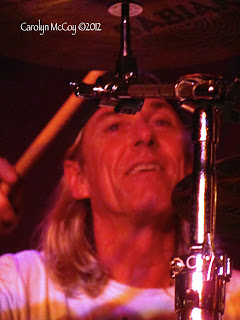 Points North has labored for many years creating a sound that makes them unique among the lead guitar driven bands that are so ubiquitous in most music scenes. What sets them apart is that Points North approaches their guitar-driven music featuring the guitar as the vocals of the band. It makes for an unusual experience with a hard rock band.  In the Points North experience the listener is given the freedom to experience the full instrumental thrust of the music without the interference of words, allowing the guitar virtuosity of Mr. Barnett to squeal, moan and wail in place of a vocalist.

The Road To Rock & Roll:

Rock and roll has the audacity to be loud, obnoxious and over the top. That is just the nature of rock and roll; it can’t help but be that. But every now and then, rock and roll comes in a softer, more melodic package and can send us into a state of peaceful aural bliss while still teasing our synapses into understanding that it is rock and roll that is entering into our wee bitty brains. Points North does just that; they compose and create beautiful hard rock music. 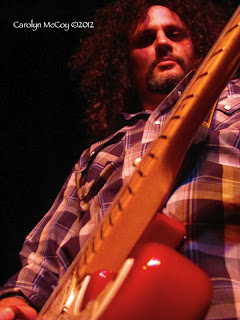 “The folks at Magna Carta are wonderful, and they really get us.  They’re a musician’s label; lots of our favorite artists have put out records with them.” Says Eric.

Kevin adds, “It is still amazing to me. I’m 56 years old – who else do you know who gets their first record deal at 56 these days?? It is generally younger players that get these kinds of deals. And thankfully it was Magna Carta who saw the potential in us.”

Recorded at Foothill College in Los Altos Hills, California, a school known for it’s incredible sound engineering programs.  Road Less Traveled was made on a budget. “We knew we wanted to do a record, we had a full set ready to go,” states Eric Barnett, whose crazy curls and piercing eyes are very much a part of his guitar-maestro mystique. “Then our friend Dave DeVillers came along. We had known him a while and he was enrolled in the Music Technology program at Foothill College and he really liked the band.  He called me to ask if we’d come in and do the typical student project; a demo, recorded and mixed over a weekend.”

Little did the band or the unsuspecting sound engineering student know that the project would take on epic proportions and become a full-length album. “It’s worked out for everyone; we have our record and Foothill College can point to our record as a selling point for their program and facilities. Everyone on the record, from the band to the engineers really stretched themselves and put in 110%,” says Eric, of the album, “We’d demoed some of these songs before but what we got on this record was really everyone’s best effort.  Hearing the recordings evolve over time and getting to be involved in something that we really felt was going to be good when it was all said and done was really a treat.”

Road Less Traveled is a beautiful album. While the tendrils of Eric Barnett’s searing guitar riffs permeate the listener’s ears, the foundations created by the elegant grandiosity of Kevin Aiello’s drums and Damien Sisson’s heart thumping bass lines also hold and caress one’s ear. The band works their alchemy to create magic straight from the cauldron of hard rock.

“Everyone writes their own parts for the most part, but typically someone comes in with a song structure as a starting point. But we also work collectively to improve on the ideas and everyone always has a voice in those dialogues, and sometimes one or the other of us would come up with a new part or idea that would change the arrangement, “says Eric. 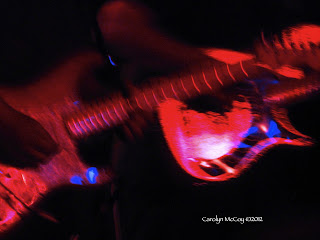 From the scorching opening guitar squeals of “Vast Horizons” to the sweet and soaring closing of “Sweet Solitude”, every song tells a story with sound. “The Phoenix”, which brings the soul to joyous flight amidst the rhythm and guitar is a high point on the album. “Maiden Voyage” drowns us in a deluge of pure, fast-paced rock.  “Delay Song” is a fun and playful romp of changing beats, while the guitar echoes while it gently weeps. I like to think of Points North as a band for cerebral metal heads who use their head for thought as well as banging. The song structures created by Points North are complex and change time signatures, feelings and moods while taking you on an aural odyssey, on path that resembles a Road Less Travelled. 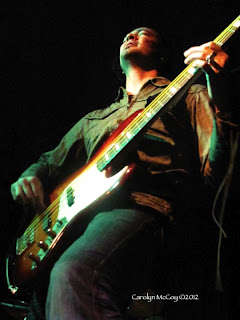 Even amid the departure of bassist Damien Sission, before the release of Road Less Traveled, and re-cementing the lineup with Whitesnake bassist Uriah Duffy, the future path of Points North will be guided by the music. With upcoming tours to promote the new album, the band is solid and ready to make a name for themselves in the music industry as serious players.

Says Kevin of the changeover of bassists, “Damien has an approach and style on the bass that is all his own; lots of two-handed tapping and very percussive. The parts he created for the Points North tunes along with his own tune-contributions were very unique and made it all the more difficult for us to find a replacement for him when he wasn’t available.” And upon meeting Uriah Duffy, Kevin continues, “I was floored the first time I saw him play. I was thrilled to be playing a show with a ‘major’ rock star in the house!”

Uriah’s dynamic stage presence, star-power and incredible talent ushers in a new era for Points North. Uriah’s transition into the band was sweet and natural, “We all have a great deal of congruent experience and musical overlap, yet we can also bring our individual voices to the table. Eric is very particular about parts and arrangements and Kevin has such a massive vocabulary on the drums and always chooses the right beat for a passage. This has made song writing a very fun and natural experience, something I don't know if I've ever felt before. It's very
rewarding.” 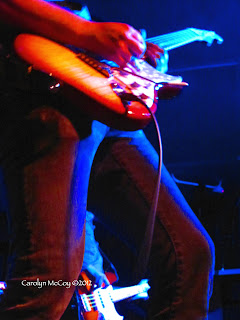 Points North is a band that has worked hard to find their voice amid the clamor of a thousand other bands looking for an audience. Their live shows bombard us with sonic pleasures of big sound and the connections between each of the players depict a professionalism of seasoned and talented musicians. They are a unique band that deserves to find recognition and their music is worthy of your time.

All photos and text Carolyn McCoy ©2012
Thanks mucho to Dan Rauck for kicking butt as my editor! ox 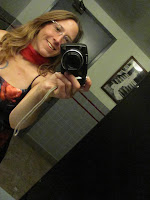