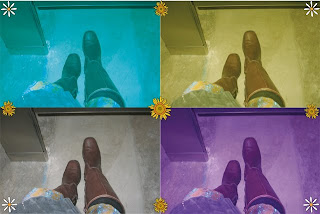 It’s rare that I listen to any music at home, weird huh? I mean, right now with I-Tunes a short click away I am hearing only the tip-tap of the keyboard and the hum of the refrigerator from the kitchen. I do get exposed to new music often with the bands I discover and the CD’s that I listen to through the car stereo. But where it’s at for me, the crème de la crème of my passion, is Live Music.
Seeing Live Music is one of my favorite highs and as I am one of those “touchy-feely” types of people that live life through their body, I love the thrill of sound as it slams my inner core with some amazing musician hitting all the right notes in all the right places. So what fan, what groupie, what music junky would EVER turn down a free backstage pass to meet an incredible band? Not me!
I was Miracled this Groupie’s Gold, “The Backstage Pass”, by a friend of mine who was hometown friends with the band, moe a phenomenal band whose musical language is JAMMIN’! They are really well known and they play all the big music festivals, fill good-sized venues such as The Fillmore and Warfield and they have many albums under their belts. My understanding is that my friend knew the band “Back in the Hood” when they were just a regular Bar-Band kind of-band. Then they hit the Big Time.  So here I was, ready to party hard and the biggest thrill was that I had stuck to my upper torso my first-ever Back Stage Pass!
I have to admit and I am ashamed to say this, at that point in my life I had never really heard moe’s music before. I know I have heard in passing a song or two on the radio that I liked of theirs. So upon my arrival at SF’s amazingly beautiful concert hall, The Warfield, I didn’t really know much about the band. My accomplice Mizz K and I cruised through the line like VIP, slathered our bodies with our passes and high tailed it to find Love. I was so nervous but was dressed to the nines knowing I was going to meet some Famous Musicians, and well…who knows???
The moment of truth came upon me as we went through the curtain and I got my BACKSTAGE PASS checked by the security dude #1. I proceeded to skip down the stairs where I was honored to have my BACKSTAGE PASS checked by security dude #2. I then sat nervously with my friend in the lounge area for someone from the band to summon us.
Security dude #3 escorted us to the dressing rooms of all the musicians. On the walk down the hallway, my eyes were looking for all the indecent debauchery. My ears were waiting to hear the squeals of other groupies or the crash of a whiskey bottle against the wall. But it was relatively quiet and all I saw were a bunch of regular looking dudes hanging out in jeans and t-shirts, drinking Cokes and eating Skittles.
Hmmmm….where was all the craziness???

I hung out with the band for about 20 minutes. It was fun but I was still waiting for the “real fun” to begin. I was waiting for the piles of drugs. I was waiting for the cute musician boys to fondle me with there eyes. Instead, my friend and I chitchatted with the band about their kids and families, the new houses they just bought or the rigorous tour schedule. I bonded with one musician boy over the friskiness of our children and how we miss them when we are away from them. A bit different then I thought, yes. They all seemed like Normal Guys, the only difference was their day job; being in a Famous Band.
My friend and I sat down to watch the show from our seats as the Normal Guys I just met, the ones who chit chatted about kids and dog food, picked up their instruments and blew me away. My jaw dropped and I fell in love with them all as they hit me hard with their psychedelic jam music. All through the show, I keep thinking, “I am so glad I met them before I saw them play, or else I would have acted like a moron!”  And indeed, I would have the opportunity to prove that when I saw them after the show.
Backstage lounge again, the show’s over, I am really freaked out now. Phil Lesh showed up to play with them for part of moe's sweltering second set and now he’s not 10 feet from me. I had to pee but that would mean passing Phil Lesh and I didn’t think I could handle that. The band comes out and I watch as they nonchalantly chat-it-up will Phil and I sit in awe, stunned at these Normal Dudes who channeled The Divine through their bodies and instruments. I could not talk to them as easily and I felt like a fool. I ended up leaving my friend to hang late into the evening with her musical friends. I was too snokkered on the evening to take it further than that, but that was enough.
I lost my backstage pass years ago, that Groupie’s Gold is somewhere underground at this point, but I still have all the memories of that amazing experience and that to me is the Real Gold.