The Walk Of Life With Peck, The Town Crier

Life is but a journey… We all begin somewhere and end up some place else, the pit stops, segues and adventures along the way form who we are and how we choose to live. We learn something new with each step of this journey.  This particular journey takes place on a gorgeously sunny Sunday afternoon in Marin County as music maker Chris Peck, AKA Peck The Town Crier, and yours truly wander the streets of our small hamlet chatting about everything under the sun. Chris Peck is a gifted song writer pumping out self-produced albums of intelligently quirky tunes and then there’s me, a struggling Rock n’ Roll Writer trying to make a name for herself through creative passions for all things music. It seems a fitting outing for two creative, kindred souls hanging out for a day of conversation.
We stroll languidly past high-end boutiques and Latin super markets, we saunter under maple and oak trees that hold leaves still hanging with the remnant touches of fall color and through small city parks and over dirty sidewalks, we walk. We talk about the weather, we touch upon conspiracy theories, we get, as one Chris Peck song suggest, “coffee, muthafuckin’ coffee” and we talk about my writing. But mainly, we talk about his music.  As that is why we are chatting away on this blindingly bright California spring day. The purpose of this stroll is for me to get a better understanding and find out more about this gangly, white boy rapper-beat-poet dude named Chris Peck, who’s songs inspire goofiness, big ideas, awareness of the soul and a bit of bump-n-grind to boot. Beginning at the tender age of 10, Chris Peck took to music like a fly to honey. Guitar was number one and was followed by drums at 11.  As he grew older, his musical passions continued onto bass and a deeper connection to percussion. “I got way into Cuban music, Salsa and Rhumba, and learned some rudiments of Conga drums in Havana and Matanzas, Cuba when I was 17 and 18. I saw people go into trance at ceremonies, danced with ladies in the nightclubs, and drummed for 6 hours a day with an older gentleman named Roberto.”
Songwriting and musical arrangement began at 11 with a tune called “The Irishman”.
“I’ve written pretty steadily and it has always involved a toggling between lyrics and music. A good amount of my material is instrumental. I like to make little home versions on a multi-tracker, or hash things out on the musical staff or make a graphic representation of the music to help me figure out the form and arrangement.”
Fused within Chris is a lifelong love affair with creativity through songwriting and wordplay. Honing his poetic chops in a weekly gritty-streets-fueled Poetry Slam in the heart of San Francisco’s Mission District, he is known for tossing words with other poets amid the insanity of a busy neighborhood known for it’s deep politics. “Thursday nights, I go out to 16th & Mission in SF, where about 100 people gather and perform for each other outside at the Bart Train Plaza. There’s no microphone, and it’s a noisy street corner, so it really focuses you on the power of your performance, and some way to grab people’s eyes and keep them. I feel like a different person when I’m there, its like bullfighting. You can get mad glory or embarrassment at 16th & Mission.” Chris left The Bay Area in 1998 to study music at New York University only to return in 2003. His main influences have always been other musical artists including but not limited to Weather Report, Kraftwerk, Mahavishnu Orchestra, Neil Young, Joni Mitchell, Laurie Anderson, Claude Debussy, Terry Riley, Deerhoof, the Wu Tang Clan, Arthur Russell, Yusef Lateef.  When it comes to hip-hop for Peck, the crème de la crème is the great New Orleans mc Mystikal.   “Some musical fascinations lose their luster for me, but not Mystikal. I keep feeling more impressed by him whenever I come back to his music.  It’s all about his voice, the characters he inhabits, his story telling, and for God’s sake, his rhythm. There’s a song called “Shine”, dedicated to his sister’s memory, that is so dang soulful and rhythmically complex.” With 1 EP’s and soon to be 5 Full-length albums under his belt, Home Phone- (2010), Le Chronique (2009) Groundhog's Day (2008) and The Garden Sings (2005), Chris is anything but shy about promoting his own music. Whether standing tall alone as Peck The Town Crier, the multi-instrumentalist genius, or with a band of rotating musical friends called The Crysmuscles, Chris does all he can to enhance his quirky sound and songs. Fusing White Boy Poetic Rap with anything form Rocking to Ethereal tunes, you may find a lot of similarities to the artist Beck. “My first album is called “Your Tape Machine’s Not Broken”. I made it on an old 4-track reel to reel, and it’s really funky-sounding and blown out. Most of it happened in the summer of ’97, when I had just got back from my first two weeks in Havana. I made an altar on my ceiling, dedicated to Elegua, the Santeria deity who gives and takes life. I remember the feeling of making that music, I was way overjoyed and had all these instruments and cables out in my room, eating lots of apples. I felt kind of possessed, like people talk about with automatic writing. Because of the purity of that experience, I still think that album is the most sacred to me. At some point this year, I’m going to re-release it.”
With his amazing back stock of songs as well as his constant writing and creating of new songs, Chris is never at a loss for fodder for all his albums. “About 80% of each record is made of songs written in the interim since the last release. But I DO reach back and re-work old songs. Sometimes, even a tune that’s been released on a previous record will get re-recorded with a new arrangement, or I’ll poach material from within the song and incorporate it into a new setting.” “I really hope my music will be, fresh, surprising, healing & real. If I can get those elements together, I’ll be making music I’m really consistently stoked about. I would love for my music to be heard by little pods of people all around the world; Like some little rare breed of bird, that convenes on an island once a year and celebrates their quirkiness together. When I’m an old man, I would love to meet young musicians and work with them. I love that continuum of music, and of human knowledge in general. I love my heroes and teachers so much, and I want to do MY thing with just as much fire and dedication as they did THEIRS.”
With his big dreams and constant ideas, Chris Peck wants to do it all. “Really, in my path as an artist now, I’m hoping to grow outside pure music making, into some kind of medium that involves musical skills on display but also some type of public interaction, storytelling and myth-making. It feels like this new medium will be more attuned to what we’re feeling as a people now a day.”
“I spend hours at coffee shops every week, trying to figure out what the hell that’s going to look like. Someday soon, I’m going to take action on all this yearning.”


Chris and I end the day as the Spring sun begins to wane in the late afternoon sky. We have come full circle with our journey, him with his story told and me filled to the brim with the experience of the day, off to mold the experience into his story, both of us collaborating on our desire to be heard by many.

www.peckthetowncrier.bandcamp.com
All other photos of Chris Peck are by Cat Rivera:
www.innerjungle.blogspot.com


Moonmama LOVES you!
Thanks again Dan Rauck for editing my words. ox 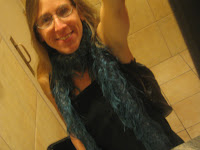